Thousands pack Texas church shooting family funeral servicefeb 8th zodiac signChurch member John Holcombe, among the massacre’s few survivors, invited the public to attend the funeral of his pregnant wife, three of her children, his parents, a brother and the brother’s 18-month-old daughter. 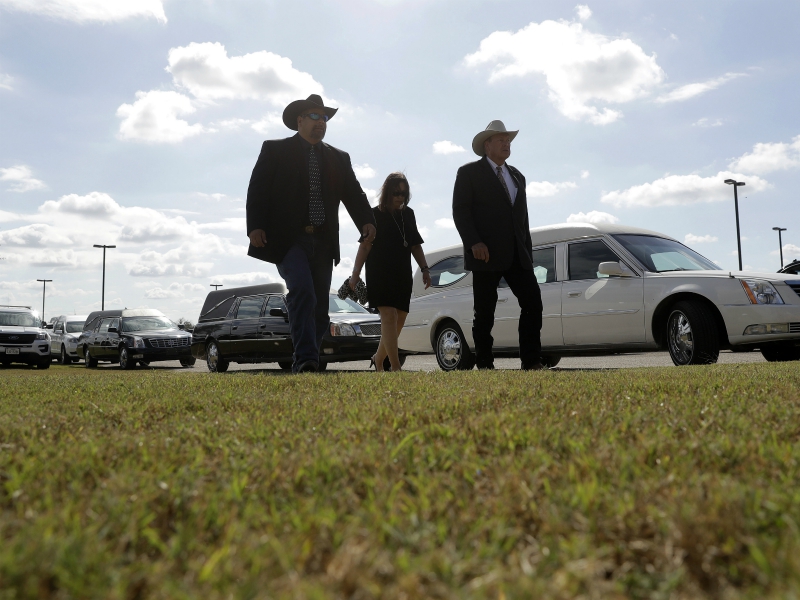 Mourners walk past a line of hearses as they arrive Nov. 15, 2017, for a funeral for members of the Holcombe family who were killed in the Sutherland Springs Baptist Church shooting in Floresville, Texas. A man opened fire inside the church in the small South Texas community last week, killing more than two dozen. (AP Photo/Eric Gay) November 15, 2017 By Emily Schmall ShareTweetShare

SUTHERLAND SPRINGS, Texas (AP) — Three thousand mourners filled an event center to capacity for the funeral of eight members of a family who were among the more than two dozen killed in a shooting at a small Texas church.

RELATED: The glue that kept Sutherland Springs together before and after the shootings

Families of the victims accompanied black and white hearses in limousines as fire marshals and sheriff’s deputies shepherded hundreds more — some in funeral attire, others in everyday clothes — to the funeral Wednesday (Nov. 15) in Floresville, Texas, about 12 miles from the First Baptist Church of Sutherland Springs, where the Nov. 5 shooting occurred.

This April 16, 2017, photo provided by Torie McCallum shows Sutherland Springs First Baptist Church shooting victims John and Crystal Holcombe in Floresville, Texas. John survived the shooting Nov. 5 at the church but Crystal, who was pregnant, was killed along with three of their children. (Torie McCallum via AP, File)

Church member John Holcombe, among the massacre’s few survivors, invited the public to attend the funeral of his pregnant wife, Crystal, 36, and three of her children, Greg, 13, Emily, 11, and Megan, 9; his parents, 60-year-old Bryan and Karla Holcombe, 58; a brother, 36-year-old Marc Holcombe; and Marc’s 18-month-old daughter, Noah. The dead will be buried privately on an unspecified date.

News reporters were barred from entering the event center and were being held in a pen with two trucks obscuring the view inside.

The gunman, Devin Patrick Kelley, began firing into the church as John Holcombe’s father, Bryan Holcombe, an assistant pastor, ascended to the pulpit. Walking up and down the center aisle, Kelley killed 25 people at the church, including crying babies at point-blank range, according to witness accounts. Authorities have put the official toll at 26, because Crystal Holcombe was pregnant.

Holcombe was managing the church’s audio-visual operations at the back of the building and escaped with minor injuries. Crystal Holcombe’s 7-year-old daughter Evelyn also escaped the barrage of gunfire. Her eldest child, 14-year-old Phillip, had stayed home from church services that day.

Crosses for members of the Holcombe family are part of a makeshift memorial for the victims of the shooting at Sutherland Springs Baptist Church placed along the highway Nov. 10, 2017, in Sutherland Springs, Texas. A man opened fire inside the church in the small South Texas community on Nov. 5, killing more than two dozen. (AP Photo/Eric Gay)

Kelley died of what appeared to be a self-inflicted gunshot wound after he fled in a vehicle. Authorities say Kelley was involved in a domestic dispute with his mother-in-law, a member of the church who wasn’t present that day. However, among the victims was Lula White, the gunman’s wife’s 71-year-old grandmother.

Kelley had a history of domestic violence: He was given a bad conduct discharge from the Air Force after pleading guilty to assaulting his first wife and stepson.

Under federal law, anyone convicted of domestic violence cannot purchase a firearm. But the Air Force failed to inform federal law enforcement authorities that Kelley had been court-martialed. When he tried to buy guns after his release from a military prison, his conviction was not in the database used to conduct background checks, and the purchases went through.

In addition to those killed, another 20 people were injured in the shooting. Eight survivors remained hospitalized Wednesday at two San Antonio-area hospitals, their condition ranging from good to critical.