Summary: Researchers have identified a new target in the brain that underpins the freezing response associated with anxiety and fear. The findings could provide a new drug target for anxiety-related disorders.

A new target in the brain which underpins the eliciting of anxiety and fear behaviors such as “freezing” has been identified by neuroscientists.

The University of Bristol researchers say the discovery of a key pathway in the brain, to be published in the journal eLife, offers a potential new drug target for treating anxiety and psychological disorders, which affect an estimated 264-million people worldwide.

Existing anxiety-reducing drugs are not always effective for all patients and often have unwanted side effects. Understanding the brain networks and mechanisms which underlie fear and anxiety may offer a new approach to developing better treatments for anxiety disorders.

Neuroscientists from Bristol’s School of Physiology, Pharmacology and Neuroscience, sought to investigate how the brain’s cerebellum, which is connected to many brain regions associated with survival networks, influences activity in another area of the brain called the periaqueductal gray (PAG). This PAG area lies at the hub of central networks that co-ordinate survival mechanisms including fear-evoked coping responses such as “freezing.”

To investigate this, researchers fitted animal models with electrodes to record activity within the brain’s PAG region and applied a conditioning task, whereby an auditory tone is paired with a small foot shock, eliciting the formation of a “fear memory” and freezing, a behavioral index of fear. The team showed that within the brain’s PAG area, a subset of brain cells increased their responsiveness to the conditioned tone, consistent with encoding a fear memory. 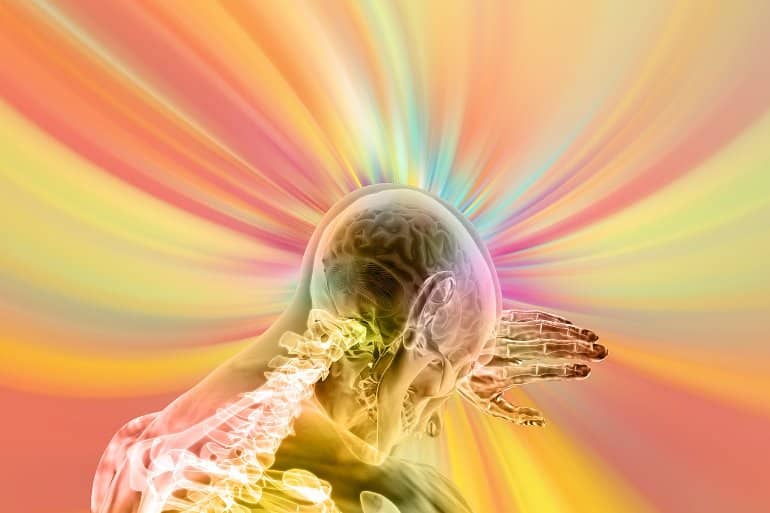 This PAG area lies at the hub of central networks that co-ordinate survival mechanisms including fear-evoked coping responses such as “freezing.” Image is in the public domain

However, when cerebellar output was altered during conditioning, the subsequent timing of fear-related neuronal activity in the PAG became less precise and the duration of fear-related freezing behavior was increased confirming that cerebellar-periaqueductal gray interactions contribute to fear conditioning processes. The team showed that the manipulation of a direct cerebellar-PAG pathway, also caused impairments in fear conditioned freezing and ultrasonic vocalizations.

The study’s lead authors, Dr. Charlotte Lawrenson and Dr. Elena Paci, explain: “Until now, little was understood about how the cerebellum modulates neuronal activity in other brain regions, especially those related to fear and anxiety. Importantly, our results show that the cerebellum is part of the brain’s survival network that regulates fear memory processes at multiple timescales and in multiple ways; raising the possibility that dysfunctional interactions in the brain’s cerebellar-survival network may underlie fear-related disorders and comorbidities.”

The study’s findings provide new insights into the way the PAG encodes fear memory and also provides evidence that the cerebellum is an additional key structure in the list of brain regions that contribute to the fear/anxiety network and offers a novel target for treating psychological conditions including post-traumatic stress disorder.