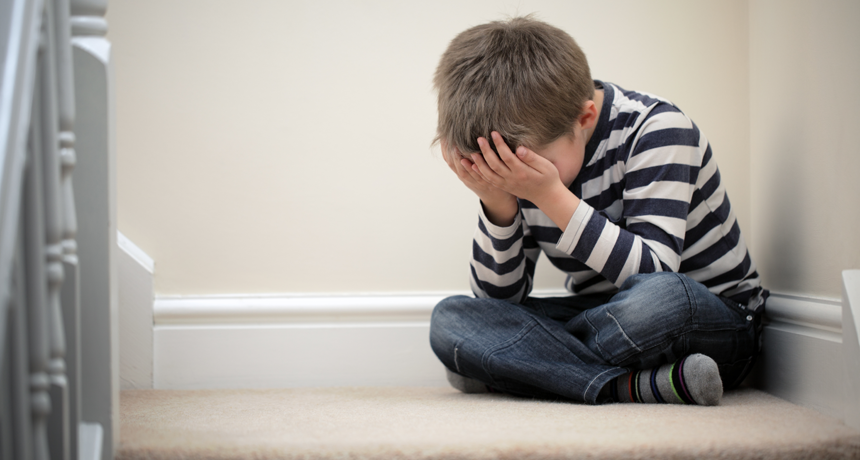 Lab experiments show that physically abused kids have trouble learning to make choices that consistently lead to a reward. Later on, this difficulty can contributeto behavior problems, researchers say.

Abused kids may be hit, choked and otherwise physically attacked by their parents. This leads them to see the world as a place where hugs and other positive responses to good behavior happen inconsistently, if at all. And this physical abuse doesn’t just leave kids black and blue. It also bruises their ability to learn how to act at school and elsewhere. This can lead to the problem behaviors often seen in abused children.

That’s the finding of a new study. And it is the first time researchers have linked trouble learning a basic form of social skills in children to their misbehavior years later.

Jamie Hanson is a psychologist at the University of Pittsburgh in Pennsylvania. He and his colleagues focused on decision-making in abused kids. Their experiments showed that physically abused kids lag behind others in learning to make choices that lead to a reward. This was true even after many trials.

These children stick to what they learned early in life — that rewards are rare and unpredictable, but punishment is always imminent. In situations outside their families, “Physically abused kids fail to adjust flexibly to new behavioral rules,” explains coauthor Seth Pollak. He’s a psychologist at the University of Wisconsin at Madison. Such kids never learn rules for good behavior with teachers and other children. So they end up fighting peers on the playground and acting out in class.

The researchers published their findings February 3 in the Journal of Child Psychology and Psychiatry.

Hanson’s team studied 41 physically abused and 40 nonabused kids. All were between the ages of 12 and 17. The kids were different races and lived with their parents in poor or lower-middle-class neighborhoods. All were similarly bright and successful in school.

In one experiment, kids saw a picture of a bell or a bottle. Researchers told them to choose one of those objects to earn points they could exchange for toys. Kids who got enough points could choose from several cool toys in the lab. These included a chemistry set and a glow-in-the-dark model of the solar system. Kids with fewer points would choose from plainer toys, such as a Frisbee or colored pencils.

Both groups of kids chose higher-point images more often as the experiment went on. This showed that they all gradually learned the values of the images. But physically abused kids lagged behind. They chose the more-rewarding image in 131 out of 200 trials, on average. Nonabused kids picked that image in 154 out of 200 trials. Pollak thinks the abused kids were held back by the expectations they had picked up at home.

More than 117,000 U.S. children were victims of documented physical abuse in 2015. That’s the latest year for which data are available. If the new finding holds up, it could lead to new ways to help such kids.

For example, Pollak says, these kids might get training in how to tell apart safe frpm dangerous settings. They might also get lessons on how to control their impulses. Treatments currently focus on helping abused children feel safe and less anxious.

If abused kids have trouble learning new rules about rewards, it indeed could lead to behavior problems later on, says Kathryn Humphreys. She’s a psychologist at Stanford University in California who did not work on the new study. There are, however, other possible reasons that abused kids might act disruptively, she points out. They might be especially sensitive to social stress, for example. Or, she adds, they might be convinced that others always have bad intentions.