Racial discrimination takes many forms, some big, others small. But they all matter. Teens in a study who experienced racism showed worse symptoms of depression after just two weeks.

Sadly, racial discrimination happens every day. Indeed,for some U.S. kids, it’s a five-times-a-day thing. That’s the finding of a smallsurvey of Black teens. Moreover, these kids showed worse signs of depression after two weeks ofsuch experiences. Mental-health researchers worry that over time, such ongoingracism will cause more and more emotional harm.

Devin English works at the Rutgers University Schoolof Public Health in Newark, N.J. As a psychologist, he studies human behavior,the mind and emotional health. He and other researchers wondered how commondifferent types of discrimination are for Black teens. They also wanted to see whetherracism affects teens’mental health. To find out, he and some colleagues surveyed 101 Black students,aged 13 to 17, in Washington, D.C.

Team members first asked teens 20 questions aboutsigns of possible depression. For instance, did these kids have troublesleeping? Did they have trouble keeping their mind on what they were doing? Hadthey lost interest in some of their usual activities?

Five things students can do about racism

Then the team asked the teens to complete daily surveysfor two weeks. The 15 survey questions changed each day. In all, the surveysasked about more than 60 types of experiences that might indicate racism. Theseranged from physical assaults and bullying to insults andother nasty behaviors.

But the incidents didn’t have to have been aimedat the teens directly. Racism experienced by a family member, neighbor orfriend can have broad impacts. This type of secondhand — or vicarious —experience can hurt kids as well. Teens also can face racism online.

Then there are smaller — micro — aggressions. These can be seemingly small slights orinsults. A store clerk might first help customers who came in after a Blackteen. Or a teacher might not bother to say a student’s name correctly. The personbehind the microaggression might not mean to give harm. But the student canstill sense the person’s prejudice and feel hurt.

If a Black teen feels upset by racism, forexample, a White person might say, “Get over it.” That downplays the teen’sexperience and suggests it shouldn’t hurt — even if it truly does. Or, someonemight ask a person of color to speak for all members of his or her race orethnic group. That wrongly suggests that everyone in that group is alike.

Other microaggressions take the form of teasing.Some teens might say something they claim is being done in fun — but isn’t funat all to the targeted student. Teasing and other microaggressions make us“feel that we’re not normal and we don’t belong,” explains English atRutgers.

Teens in the new study completed 1,139 dailysurveys and reported 5,606 experiences of discrimination. That comes to anaverage of almost five events a day. The three most common forms were individualand vicarious online incidents and race-related offline teasing. 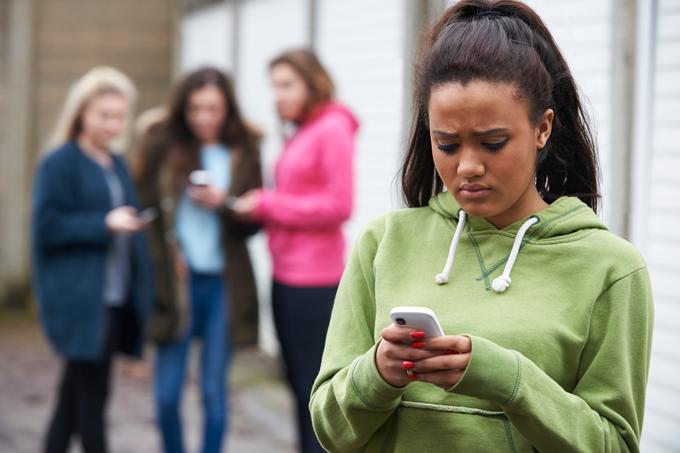 Teens surveyed in a recent study reported frequent experiences of racism when they went online.MachineHeadz/iStock/Getty Images Plus

The worsening of symptoms was small but worrisome.“This is over a two-week period for young people,” English says. “And ifdiscrimination is causing someone to feel worse about themselves over a short periodof time — and that’s happening over and over and over again — you would expectthat it’s leading to things like more serious mental-health symptoms.”

Those impacts will add up over time, Englishexpects. It’s like a backpack that keeps getting more books, keys, pencils andother things tossed into it. “Over time, if we don’t have the resources and supportto help unload some of those things from the backpack, it becomes really,really heavy,” he says. And eventually, he says, it “starts to weigh us down.”

His team’s new study appears in theJanuary-February 2020 issue of Journal of Applied Developmental Psychology.Future studies will test if similar results show up in other cities. “We knowthat Black communities are extremely diverse,” English notes.

“I wish I could say the findings were a completesurprise to me. They weren’t,” says Roxanne Donovan. She’s a psychologyprofessor at Kennesaw State University in Georgia. In a study seven years ago, hergroup surveyed Black women college students. Nearly all of them — 96 percent —said they faced racial microaggressions at least a few times per year.

“What did surprise me was the high number” ofevents that teens in the new study had to deal with, Donovan says. She applaudsthis study’s method of asking teens for daily reports. She also commends thefocus on multiple types of discrimination.

What can be done?

Sadly, too many young people are treated badly becauseof their race. But, English stresses, “it’s not about a problem with them.” Rather,he says, society is the problem.

Teens can do something about racism. If a situation isn’t dangerous, speak up and say how you feel. In anycase, talk with parents and other trusted people at school or in yourcommunity. Teens and families also can encourage schools to take a no-tolerancestance against racist actions, including teasing and bullying.

Teens who aren’t people of color can and should speakout against racism, Donovan and others say. These teens also can try to recognizeand curb their own biases. Think about what racial experiences have shaped howyou see yourself and others, English suggests. Also think about how you mayhave enjoyed some privileges based on your race. “It’s really important that weexplore that,” he says, and that “we are honest with ourselves.”

If someone talks with you about an experience ofracial discrimination, “they’re putting a lot of confidence in you, and they’retrusting you,” English adds. “It’s really important to listen to that.” Meanwhile,society still has a long way to go to fight racism.

“Five discrimination experiences daily is fivetoo many,” Donovan says. “These teens deserve better from our society.”