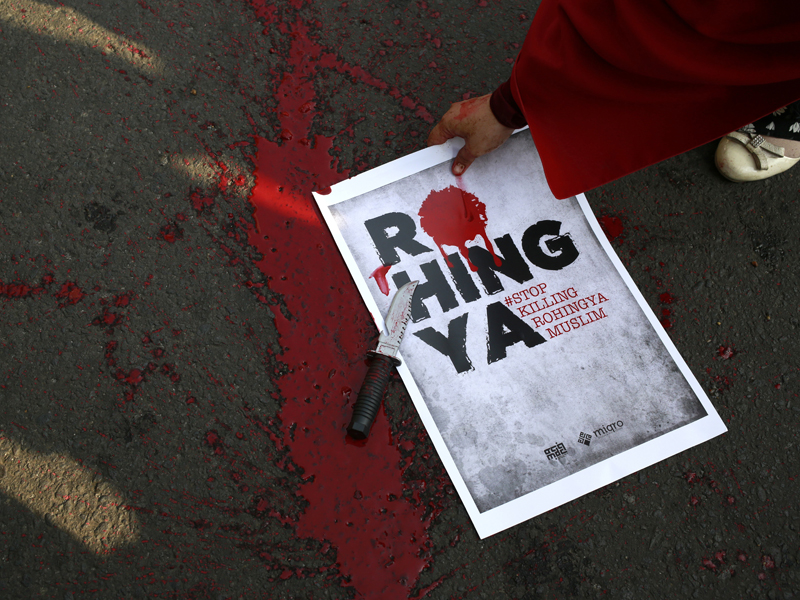 A Muslim protester picks up a poster as fake blood is seen spattered on the ground after a theatrical act depicting the violence against Muslim Rohingya in western Myanmar performed during a rally on Sunday, Sept. 3, 2017 in Jakarta, Indonesia. The violence erupted on Aug. 25, when insurgents from the Rohingya ethnic minority attacked Myanmar police and paramilitary posts in what they said was an effort to protect minority Rohingya. In response, the military unleashed what it called “clearance operations” to root out the insurgents. (AP Photo/Dita Alangkara) September 3, 2017 By Yonat Shimron ShareTweetShare

JAKARTA, Indonesia (AP) — Indonesia’s president has called for an end to violence in Myanmar’s Rakhine state and sent his foreign minister to discuss the plight of Rohingya Muslims with the country’s leader Aung San Suu Kyi.

There is mounting concern in Indonesia, the world’s most populous Muslim nation, about a military crackdown against Rohingya Muslims in Rakhine that has forced tens of thousands to flee into Bangladesh.

At a press conference, President Joko “Jokowi” Widodo said he deplores the violence in Rakhine and promised humanitarian assistance.

“Real action is needed, not just statements and condemnations,” he said. “This violence and humanitarian crisis must end.”

“Religious figures also stressed the importance of immediately stopping all forms of violence against Muslims and residents in Rakhine state and protecting the entire population of Myanmar,” the ministry said.

Marsudi will also travel to Bangladesh to inspect Indonesia’s efforts to provide aid to refugees from Myanmar.

Separately, dozens of police were guarding the Myanmar Embassy in the Indonesian capital, Jakarta, after a Molotov cocktail was thrown at the mission early Sunday morning. No one was hurt.

Jakarta police spokesman Argo Yuwono said the attack started a fire in the rear of the embassy on the second floor.