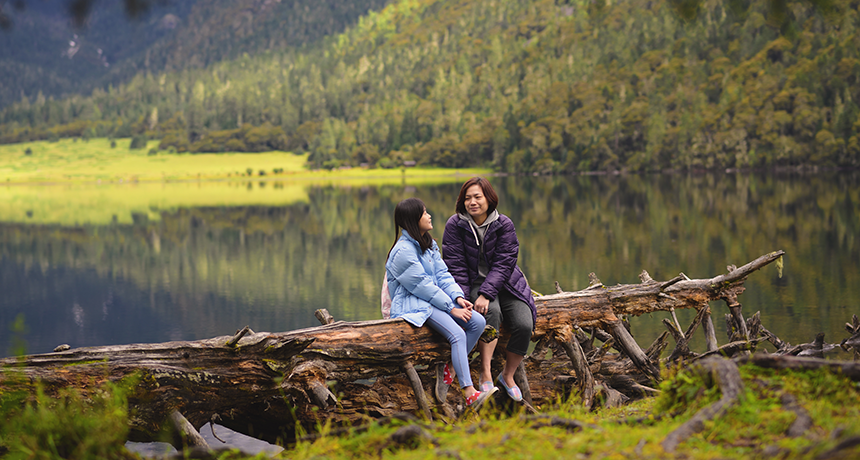 Middle school students can sway their parents’ views about climate change if they talk about the topic and share what they’ve been learning in school.

Most adults have lower levels of concern about climate change than do young people. Yet it’s adults who have the power to affect the policies contributing to climate change. Now a new study shows that adolescents may be able to raise their parents’ concerns about human impacts on climate. The key: Talk about the issues and share what you’ve been learning at school. That’s the conclusion of a study published May 6 in Nature Climate Change.

Explainer: CO2 and other greenhouse gases

Young people have good reasons to worry about climate change. Rising levels of greenhouse gases have already brought about more severe storms, droughts and other types of extreme weather. Sea levels are rising in many places. Wildfires threaten other areas. Increasing temperatures are affecting food and water supplies. Plant and animal habitats are changing. Even human health is at risk. And if people don’t act soon, the impacts will only worsen.

Ten- to 14-year olds can understand complex subjects, says Danielle Lawson. A social scientist who studies how people communicate about climate change, Lawson just received her PhD from North Carolina State University in Raleigh. She also is part of a team that tested the ability of young adolescents to teach their parents about climate change.

Adults may dismiss messages about climate change or other topics that they associate with political groups they disagree with. But most 10- to 14-year olds don’t yet link themselves to the beliefs and ideas of particular political groups, Lawson points out.

For a new study, teachers used a new curriculum with 10- to 14-year olds. It involved more than just lessons about climate change. The students also took part in service-learning projects. “One example was collecting and sampling plankton,” Lawson says. Students wrote blog posts about what they learned and shared those posts with others. The students also interviewed their parents. Someone might ask her dad, for instance, what changes he’d seen in their home town’s weather over time.

Explainer: Where fossil fuels come from

The program made sure students would talk to their parents. However, Lawson adds, “at no point did we tell kids what to think or what to say.” That way, “kids didn’t feel that there was all this responsibility put on them to change their parents’ mind about anything.”

“Overall, the [new] curriculum increases the kids’ climate-change concerns,” Lawson reports. It also increased parents’ level of concern. The researchers think that’s because students were talking about climate-related issues a lot at home.

Fifteen middle school teachers had been randomly assigned to either of two groups. One, the test group, got training on how to use the new curriculum before introducing it to students. Teachers in the control group taught their schools’ regular lessons on climate change. These programs also lacked the extra activities.

Lawson’s team assigned the students and their parents to two groups, too. The team tried to match the groups based on the number of people in a household, their age, family income and other factors. That would help when the researchers compared the effects of the new curriculum. The researchers then surveyed the kids and their parents before and after the school lessons on climate change.

Parents and students in both groups showed more concern about climate change after the lessons. But families where kids had been in the test groups showed the biggest changes.

The new curriculum seemed most effective with parents who belonged to one of two groups that typically are least concerned about climate change: men and people who hold conservative political views. Why? One reason might be that parents tend to trust their children, Lawson says. They may be less likely to think of their sons or daughters as having attitudes about climate change driven by political reasons. So these parents may now be more willing to listen and learn from them.

Parents of girls also were more likely to show more concern about climate change after the new program was used. Other studies find that girls in this age group usually have better communication skills than boys, Lawson says. And, she adds, some parents might not have talked much about science with girls before the program. So the new program might have made girls feel more confident about sharing their concerns about climate issues.

Reaction to the findings

Hilary Boudet is a sociologist at Oregon State University in Corvallis. She has done similar research with children and families on lessons covering ways to save energy. “The idea of young people engaging with their parents is an important, yet underexplored, pathway for change,” says Boudet. She found “particularly intriguing” the new study’s finding of greater impacts of daughters and the ability of kids to change attitudes about climate change in conservative parents.

The use of a control group boosts confidence that similar results might happen elsewhere, she adds. However, she says, more studies still would need to be done in other places. She also wishes the team had asked people about how they might have changed their behaviors after receiving the new lessons.

Lawson is hopeful that kids can boost parents’ understanding of climate science. “I know how powerful kids can be,” Lawson says. “They’re pretty awesome.”

And, she notes, you don’t need a special curriculum to discuss climate issues at home. “Talk to your parents about what you see going on,” she says. “Don’t be afraid to share your thoughts.” And don’t feel discouraged if you don’t change your parents’ minds after one chat, she adds. “The important thing is not to give up hope and be willing to have those conversations.”