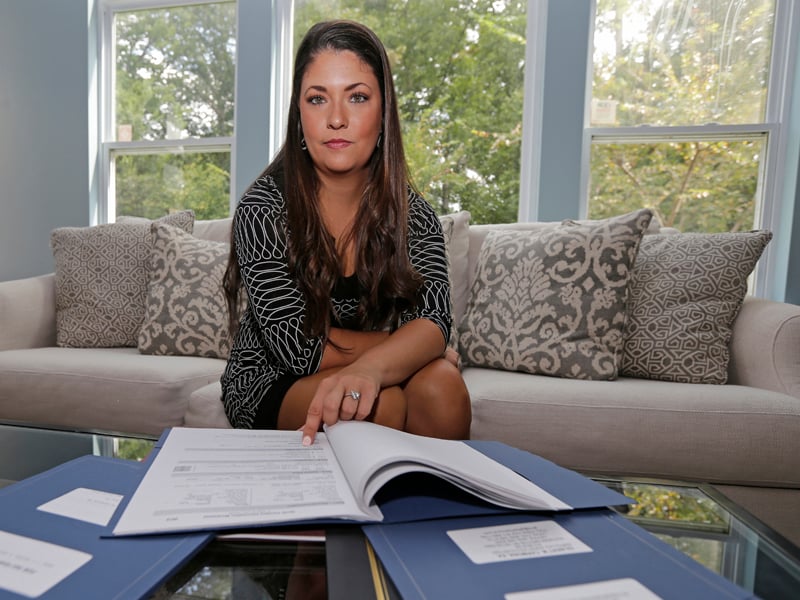 Former Word of Faith Fellowship church member Rachael Bryant poses for a photo with her tax records at her home in Charlotte, N.C., on Sept. 19, 2017. She and 10 other members of the evangelical North Carolina-based church say their leader, Jane Whaley, coerced congregants into filing false unemployment claims after the faltering economy threatened weekly tithes from church-affiliated companies. (AP Photo/Chuck Burton) September 25, 2017 By Yonat Shimron ShareTweetShare

SPINDALE, N.C. (AP) — When Randy Fields’ construction company faced potential ruin because of the cratering economy, he pleaded with his pastor at Word of Faith Fellowship church to reduce the amount of money he was required to tithe every week.

To his shock, Fields said church founder Jane Whaley proposed a divine plan that would allow him to continue contributing at least 10 percent of his income to the secretive evangelical church while helping his company survive: He would file fraudulent unemployment claims on behalf of his employees. She called it, he said, “God’s plan.”

Fields and 10 other former congregants told The Associated Press that they and dozens of employees who were church members filed bogus claims at Word of Faith Fellowship leaders’ direction, and said they had been interviewed at length about the false claims by investigators with the North Carolina State Bureau of Investigation and the U.S. Department of Homeland Security.

The unemployment allegations were uncovered as part of the AP’s ongoing investigation into Word of Faith, which has about 750 congregants in rural North Carolina and a total of nearly 2,000 members in its branches in Brazil and Ghana and its affiliations in Sweden, Scotland and other countries.

Some of the former members involved with the unemployment claims said they have turned critical documents over to authorities, even though they knew they could be charged with defrauding the government.

The former members estimated the fraudulent claims — some filed by the business owners’ wives and other family members — would have drawn payments totaling in the hundreds of thousands of dollars over a six-year period.

The Department of Homeland Security referred questions to the U.S. attorney’s office in Charlotte, which cited an “ongoing investigation into allegations against Word of Faith Fellowship” and would not elaborate. The State Bureau of Investigation said the agency would not comment “due to the overall investigation” involving the church.Whaley and church attorney Josh Farmer did not respond to numerous requests for comment.

In February, the AP cited more than three dozen former Word of Faith Fellowship members who said congregants were regularly punched and choked in an effort to beat out devils. The AP also revealed how, over the course of two decades, followers were ordered by church leaders to lie to authorities investigating reports of abuse.

Last month, the AP outlined how Word of Faith created a pipeline of young laborers from its two Brazilian congregations who say they were brought to the U.S. and forced to work at businesses owned by church leaders for little or no pay.

Over the years, church leaders have owned and operated more than two dozen businesses. The interviews with former followers, along with documents reviewed by the AP, indicate at least six companies owned by leaders were involved with filing fraudulent unemployment claims between 2008 and 2013. Most of those businesses’ employees are congregants, the AP found.

The AP reviewed individual checking account records that showed unemployment benefits deposited by the state, along with income tax records summarizing how much money some of the former followers interviewed received annually in such payments.

Fields, who spent 24 years in the church before leaving in 2015, said his employees kept working without pay while collecting unemployment benefits. “Basically, their unemployment checks would become their paychecks,” he said.

It is illegal for employers or employees to knowingly file fraudulent unemployment claims. Since Dec. 1, 2012, violators in North Carolina can face felony fraud charges if the illegal benefits totaled more than $400. Before Dec. 1, 2012, filing false claims was only a misdemeanor.

If investigators believe employers or employees were involved in a conspiracy, however, they could be charged with serious state and federal felony charges.

Fields said he knew the plan was illegal but went along with it because of intense pressure from Whaley, who founded the church with her husband in 1979.

“I’m not proud of what I did, but I have to make this right,” he said.

The price of the refusal, Fields said, could be beatings administered by fellow church members and public shaming by Whaley. The church also might mandate that he be cut off from any contact with his family, he said.

“You knew it was wrong, but you knew you couldn’t say a word,” said Rick Cooper, who acknowledged falsely filing for unemployment from April 2011 to April 2012.

In North Carolina, companies pay a quarterly unemployment tax based on the number of their workers, with the money going into a fund used to pay out claims, according to Larry Parker, spokesman for the Division of Employment Security, which oversees the program.

When a worker files for unemployment, the agency checks with the employer to learn the reason. If an employer says a worker was let go because of the poor economy, payments usually are approved quickly, Parker said.

During the recession, which started in 2007 and was driven by the housing meltdown, laid-off workers could receive state and federal extensions increasing unemployment to 99 weeks with a maximum weekly check of $535.

But in 2013, North Carolina legislators tied benefits to the state’s unemployment rate. Currently, laid-off workers can receive up to 26 weeks of unemployment, with a maximum payment of $350 a week, Parker said.

And, he emphasized, a worker must have been laid off to collect unemployment.

“If a company is trying to make workers work while they collect unemployment, that’s a potential fraud situation,” Parker said.

The former congregants said that not only were they coerced into continuing to work while collecting unemployment, the money fell short of what they needed to pay their bills.

“I was making about $700 a week, but I only collected $235 a week in unemployment,” Cooper said. “So I’m working the same hours — many times, much longer hours — for less. It was devastating for my family.”

Church members were expected to keep tithing regardless of their financial situations and Whaley kept close tabs on “who was giving what,” Cooper said.

Some of those interviewed by the AP said they learned about the practice at meetings with company officials, but that Whaley herself also promoted it.

“Jane was heavily involved. She was always asking questions about it,” said Rachael Bryant, who calculated that she had received unemployment benefits of about $200 a week for 18 months while still working for a Word of Faith minister.

Workers receiving unemployment benefits must check in every week and demonstrate they are actively seeking work by providing the names of businesses where they filed job applications, and the former Word of Faith members told the AP that church leaders had a plan for that.

“Every week we’d go to the unemployment office and put down that we looked for work at other companies operated by Word of Faith Fellowship leaders,” Rick Cooper said.

“Those companies would vouch for the Word of Faith members at the unemployment offices. It was a conspiracy. What’s amazing to me is that this went on for years and no red flags ever went off.”

Cooper said Whaley told him Covington’s business needed the money because “the devil had been attacking the company’s finances” and the minister might lose his house.

Rick Cooper’s son Jeffrey, an attorney and accountant who also has broken with the church, worked for Covington’s company, too. Jeffrey Cooper said he was so uneasy about the practice that he called the Division of Employment Security to ask what he labeled a “hypothetical question.”

“I said, ‘Can an employee file for unemployment while they were still working for a company?’” he told the AP. He said the state official replied that he hoped it was only a hypothetical question because the practice was illegal and anyone involved with it could face serious charges.

Cooper said he relayed the information to Covington, who exploded. “He started screaming at me at the top of his lungs that I was wicked,” Cooper said.

As a result, Cooper said he was publicly rebuked by Whaley and completely segregated from his wife for six months. Other church members interviewed by the AP corroborated his story.

Rick Cooper said that he and nearly three dozen employees at Diverse Corporate Tech and Covington’s other company, Integrity Marble and Granite, filed false unemployment claims over the course of several years.

Covington did not return several phone messages from the AP.

Benjamin Cooper, Jeffrey’s brother, told the AP that Whaley touted the success of the unemployment tactic from the pulpit in 2009.

“There was a church service and Jane got up and started saying that Kent had heard from God of a means to save God’s companies’ money,” Benjamin Cooper said. “She needed to have a meeting after church with all the business owners. I knew what she was referring to. That’s why I remember it. We were already on unemployment at that point.”

Rachael Bryant said she was pressured into filing false unemployment claims in 2008 after her boss, a medical professional who was a leader in the church, was audited by Medicare and told he owed money because of coding errors.

Bryant said one of her boss’s sons told her the company wouldn’t be able to pay her for a while, but that Whaley refused to let her look for another job. Eventually, she said, Whaley said they had a plan to help both the doctor and his employees.

“She said, ‘Rachael, God found a way where you can make some money. Kent’s done it with some of his businesses. So we’re going to put you on unemployment,’” Bryant said.Some of her boss’ family members also filed for unemployment while continuing to work at the business, she said.

“I remember that I went to Jane after being on it for like three or four months and I remember asking her if I could apply for a job opening in another doctor’s office. Well, she started screaming at me, ‘You’re wicked! There’s nothing but the money devil in you!’” said Bryant, who had been making about $500 a week before being reduced to only unemployment checks.

Bryant said she was too scared to leave.

Looking back, Fields — whose oldest daughter and grandchild remain in the church — said he struggles with his decision to knuckle under pressure and participate in the plan. And he regrets it.

“The businesses helped support the church,” he said. “We would make large donations. Without the businesses, they would have been in trouble.”

He paused for a moment to collect his thoughts.

“At the time, it just seemed like the right thing to do. But I was wrong,” he said. “We were all wrong.”