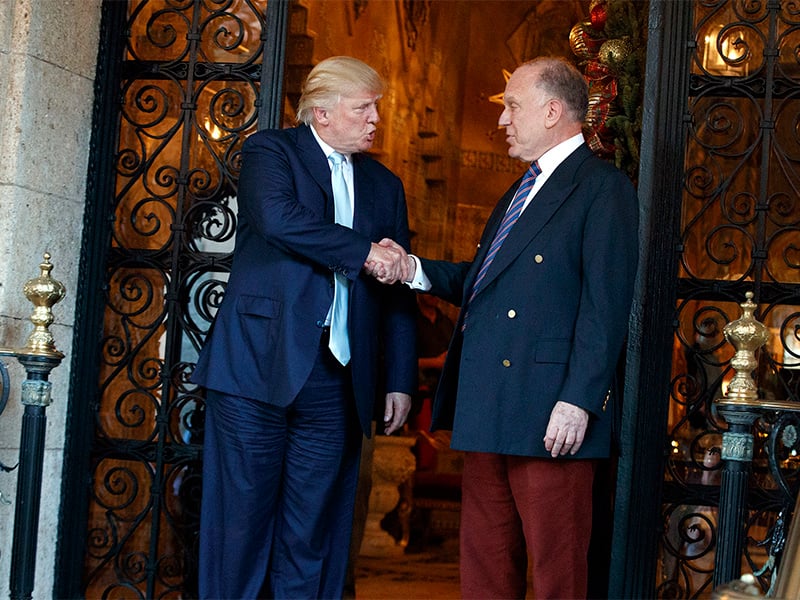 (RNS) — J.J. Gross doesn’t talk about President Trump with his daughter Nora, who unfriended her dad on Facebook before the presidential election.

“At first I just unfollowed him, so that I didn’t need to be exposed to the awful hate speech he posted on his page,” said the New York massage therapist.

Her father, a semiretired creative director who lives in Jerusalem, takes a different view of family Facebook dynamics: “She cut me off from her Facebook, lest I post an opinion of which the PC Gestapo would disapprove,” he said, adding that he and his daughter are still “very close, always in contact, and love one another deeply.”

The father-daughter clash mirrors those within many other Jewish families over Trump, whose presidency is also testing many a Jewish friendship. And in the nation at large, where opponents of Trump significantly outnumber his supporters, calls from Jews to other Jews to renounce the president have heightened tensions in synagogues, in the Jewish press and the wider Jewish world.

In past weeks — in the wake of Trump comments about white supremacy widely condemned as too late and too soft — disagreements among Jews about the president played out on a very public stage.

National Economic Council Director Gary Cohn, who is Jewish, struggled with his allegiance to the Trump administration as his wife asked him to break with it. Treasury Secretary Steve Mnuchin, who is also Jewish, defended Trump and wrote that it would be wrong to heed calls for him to abandon the president.

To many American Jews — who as a group lean heavily Democratic — the president’s comments and policies have betrayed his own personal bigotries. They were looking for him to express outrage after a woman protesting racism and anti-Semitism died in Charlottesville, Va., on Aug. 12 — but instead saw him draw what appeared to be a moral equivalence between white supremacists and those who marched against them.

Like his non-Jewish supporters, Jews who support Trump consider him an antidote to the regulation and bureaucracy they see throttling the economy. These American Jews, who tend to be more strict in their religious practice, also appreciate Trump’s oft-repeated declarations of love for Israel. 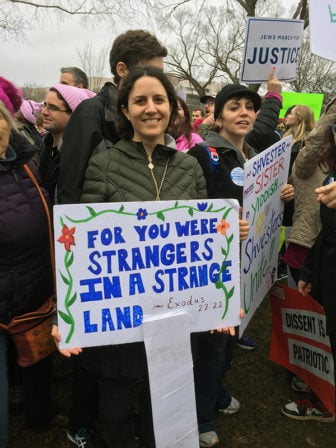 Shira, a Jewish woman from Washington, D.C., says, “I feel the religious conversation has been dominated by the right wing for too long.” RNS photo by Mary Gladstone

This lopsided division between more liberal and more conservative Jews, who together make up about 4 percent of the electorate, is no new thing. Hillary Clinton secured 71 percent of the Jewish vote — the highest proportion of any faith group — and Trump won 24 percent, the lowest.

But with Trump in the Oval Office, the tone of the political discussion today seems particularly intense within the Jewish community.

In a recent open letter, the prominent literary couple Michael Chabon and Ayelet Waldman wrote, “Any Jew, anywhere, who does not act to oppose President Donald Trump and his administration acts in favor of anti-Semitism.”

And headlines in the Forward, one of the nation’s most prominent Jewish news outlets, since the election have included “Is Trump An Anti-Semite? Ask David Duke, He Should Know” and “My Fellow Orthodox Jews: Admit You Were Wrong About Trump.”

Jane Eisner, the Forward’s editor, isn’t sure if these stories have changed any Jewish Trump supporters’ opinions of him, and she added that the paper does not engage in advocacy.

But he has surrounded himself with those who are “blind to the way they have used anti-Semitic images and tropes to rally a segment of their base,” she added.

The violence in Charlottesville, which left one person dead and 19 injured, and the president’s response to it should be a “grave warning” to Jews and those who believe in a tolerant America, according to Eisner.

“It was a frightening display, but it didn’t occur in a vacuum,” she said. “We have seen through the course of the Trump campaign and into his administration a heightened harassment of Jewish journalists and a willingness to traffic with some very nasty people.”

In decades in journalism, Eisner hadn’t received the sort of anti-Semitic and Holocaust-related email and social media abuse that she has from Trump supporters in the past year, she said.

But J.J. Gross is among the many Jewish Trump supporters who isn’t likely to change his mind by the stories in the Forward, which he calls “anti-freedom of speech” and “little more than the organ grinder for the extreme Jewish left.” He also has zero doubt that Trump has no Jewish problem.

“Not only is Trump not an anti-Semite, but he is very much a philo-Semite,” Gross says.

“To accuse him of Jew hatred is as absurd as accusing him of collusion with Moscow to rig the elections.” Repeating a lie over and over again doesn’t make it true, he said.