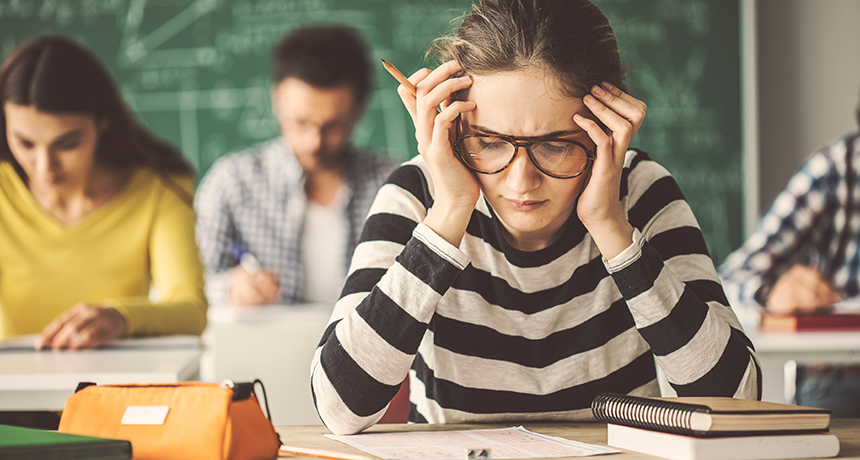 In one high school biology class, almost four in every 10 low-income students were poised to fail the course. But with some simple practices to reduce test anxiety, researchers cut that number in half. And that could boost the chances that low-income students will succeed in science, they say.

Christopher Rozek is a psychologist at Stanford University in California. He studies how stress and other things can affect learning. Low-income students are far less likely to finish four years of high school science than are high-income students, he notes. That leaves them less prepared — and perhaps unable — to pursue science and math in college. It also puts out of reach many well-paying careers in science-related fields.

Explainer: What is anxiety?

There are likely many things that play a role in that science gap in school. But one may be that many low-income students worry about whether they will do well in such fields, Rozek says. Those feelings often translate to high levels of anxiety before tests, leading to worse grades.

Reducing test anxiety had raised test scores in several small studies. So Rozek and his team decided to test it on a larger scale.

They recruited 1,175 biology students at a large, public high school in Illinois. About one-fourth — 285 students — came from low-income families. At this school, slightly more than half of low-income students typically fail their biology finals. Only 6 percent of high-income students fail.

Rozek’s group wanted to know if short stress-relief activities before an exam would affect a student’s grade. To find out, the researchers developed guided prompts to help students think about stress or fear. Then they split the students into four groups.

One group spent 10 minutes free-writing about their fears. This was designed to clear the kids’ heads so that they could then focus on the exam. Another group read about the body’s physical responses to stress (such as a racing pulse or sweaty palms) and how these can actually help with attention. Then they answered reading comprehension questions. Students in a third group did both of these reading and writing activities. A fourth group, called the active control group, read a passage that told them to just ignore their worries.

Afterward, the students all took their final test in biology. A total of 205 low-income students did one or both stress-relieving activities. On average, these students scored higher on the exam than did their peers in the control group. Indeed, 82 percent of them passed the class. Only 61 percent of the lower-income students in the control group passed. It didn’t seem to matter whether a student read or free-wrote about managing stress, or both. All tactics worked equally well at helping students pass their tests.

The activities didn’t make a difference for higher-income students. But, nearly all those kids passed the class whether they did the activities or not. These students may have had fewer pre-exam jitters. Or they may have already learned ways to handle the stress, Rozek says.

His team published its findings January 14 in the Proceedings of the National Academy of Sciences.

Robert Tai is a science-education expert at the University of Virginia in Charlottesville. He questions whether the approach really helped students. “Improving a student’s test scores will not improve the rate of them pursuing the sciences,” says Tai. His research has shown that students’ interest in math or science matters more than grades when it comes to later career paths. Also, telling kids not to worry or how to manage fear right before a test might make them more stressed, he says.

Mental activities like these won’t close the achievement gap, Rozek says. But the study shows that at least part of a test score reflects mind-set, not just knowledge of the material. And tipping scores even slightly has real-world effects. “You can imagine students who are failing science courses maybe can’t even register for additional science courses,” Rozek says. So even small boosts might help to keep science options open to lower-income kids.