A strike near Babyn Yar; but this time Jewish acceptance in Ukraine is growingagnostic definition religion

A strike near Babyn Yar; but this time Jewish acceptance in Ukraine is growingagnostic definition religionFor many Jews, Ukraine brings up memories of pogroms, antisemitism and Nazi collaboration. But Jewish life in Ukraine is no longer what it was. 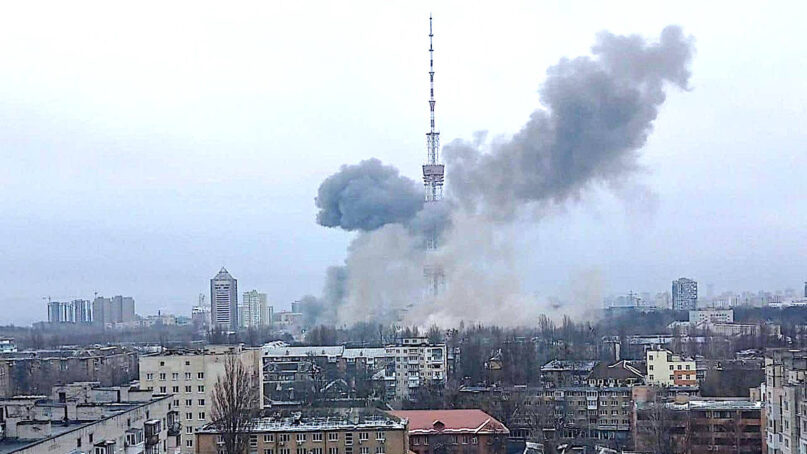 Russian military strikes hit on and around a television tower in Kyiv, Ukraine. The Babyn Yar Holocaust Memorial Center is near the communications tower. Video screen grab via Telegram March 2, 2022 By Yonat Shimron ShareTweetShare

It’s unclear if the Russians targeted the memorial center. More likely, they were interested in knocking Kyiv’s television stations off the air. Five people were killed in the strike.

But the proximity to the site where 33,771 of the city’s Jews were systematically shot dead by machine-gun fire in a two-day killing spree in 1941 is traumatic. Israel’s Yad Vashem Memorial issued a statement condemning the attack. So did the United States Holocaust Memorial Museum and the American Jewish Committee.

For many Jews, Ukraine brings up memories of pogroms, antisemitism and Nazi collaboration. Between 1.2 million and 1.6 million Jews were killed in Ukraine during the Holocaust. But Jewish life in Ukraine is no longer what it was — neither under the Nazis nor the Soviet Union.

And incredibly enough, in 2019 Ukraine elected a Jewish president, Volodymyr Zelenskyy, by a landslide — 73% of the vote.

Though he is not a religious Jew, Zelenskyy has never shied from professing his Jewish identity. Some of his family members were executed by the Nazis, including three great-uncles.

On Tuesday, he tweeted forcefully after the strike: “what is the point of saying ‘never again’ for 80 years, if the world stays silent when a bomb drops on the same site of Babyn Yar?” 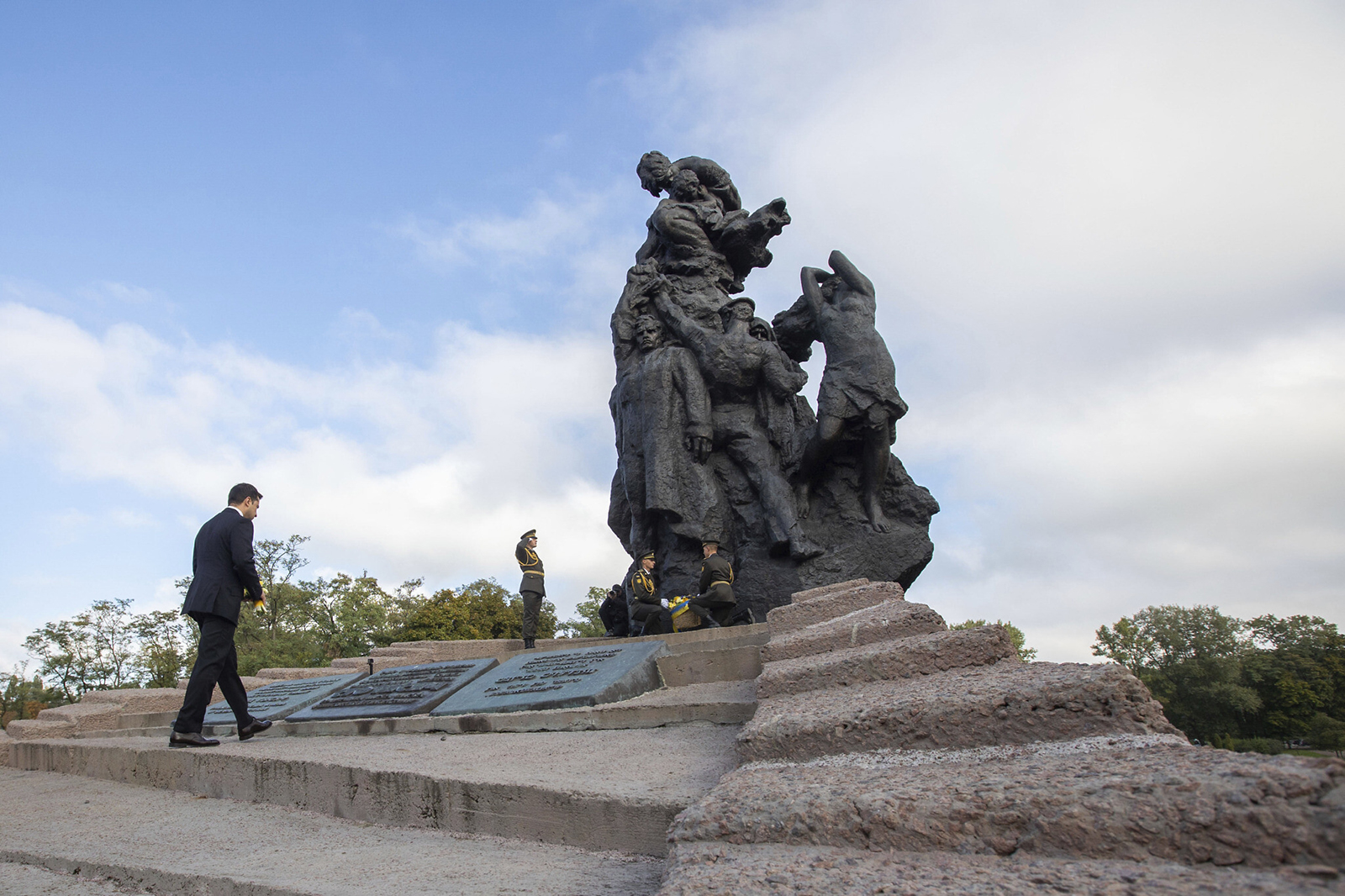 Despite efforts to suppress the memory of Babyn Yar during the Soviet years, Ukraine has conducted Babyn Yar commemorations on a regular basis since it became independent in 1991, recognizing that under the auspices of the Nazi regime and its collaborators, tens of thousands of Jews and others, including Roma, were executed.

A menorah-shaped monument to the Jewish victims of Babyn Yar was erected on the 50th anniversary of the mass shooting. Last year, the Babyn Yar Holocaust Memorial opened there.

“Today’s generation is certainly not antisemitic like it was in the Soviet Union,” said Andrej Umansky, a postdoctoral fellow at Georgetown University’s Center for Jewish Civilization who grew up in Kyiv.

In fact, said Umansky, “We know so much more about what happened in Ukraine to the Jews thanks to Ukrainian scholars.” Many of whom, he noted, are not Jewish. (Under the Soviets, there was no public discussion of the Holocaust. The Babyn Yar site, for example, acknowledged only that Soviet citizens had been massacred there.)

Recent surveys bear a new attitude toward Jews. A 2017 Pew Research study found that Ukraine was the most accepting of Jews among all Central and Eastern European countries. Only 5% of Ukrainians in the survey said they would not accept Jews as fellow citizens. In neighboring Russia it was 14%, in Poland 18% and in Romania 22%. 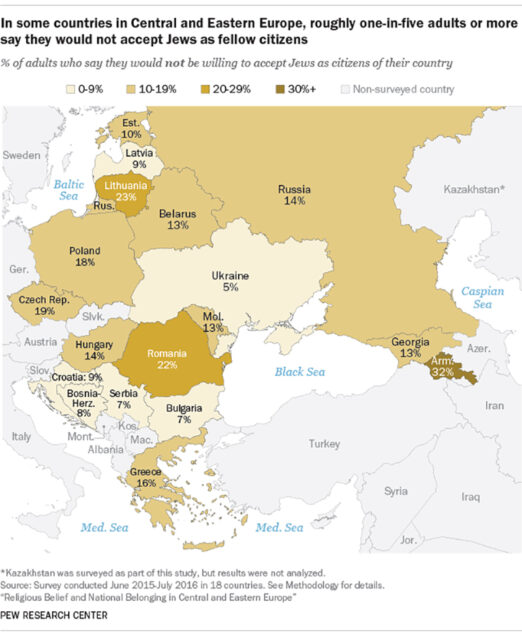 “In some countries in Central and Eastern Europe, roughly one-in-five adults or more say they would not accept Jews as fellow citizens” Graphic courtesy of Pew Research Center

There is no state-sponsored antisemitism.

“The world opened up and people started to learn about religions and nationalities,” said Misha Galperin, a native of Ukraine who is now president and CEO of the Weitzman National Museum of American Jewish History in Philadelphia. “People began to travel elsewhere. They got a different exposure to Israel, among other places. Odesa has a regular flight to Tel Aviv. It’s only three hours. It became real and humanized.”

Mark Levin, CEO of the National Coalition Supporting Eurasian Jewry, said that after the mass exodus of Jews from Ukraine in the wake of the Soviet Union’s fall, Jewish populations in both Ukraine and Russia were able to rebuild and expand their communities though they are not nearly as large as they used to be. There are estimates of between 50,000 and 100,000 Jews in Ukraine.

“In the last 30 years there’s been a renaissance of Jewish life and a building of new Jewish institutions, be it religious, cultural, educational, social,” Levin said. “These are important Jewish communities in the Diaspora today.”

Haredi Jews from across the world travel by the thousands each year to Uman, a city in the central region of Ukraine, that is a pilgrimage site where a famous Hasidic rabbi is buried.

“Life in the Soviet Union was constant antisemitism against Jews,” said Umansky. “It’s not like that now.”

RELATED: Across US, worshippers seek solidarity at Ukrainian churches, pray for peace

agnostic definition religionA strike near Babyn Yar; but this time Jewish acceptance in Ukraine is growing